Olmert Heads to D.C. to Lobby Bush on Iran 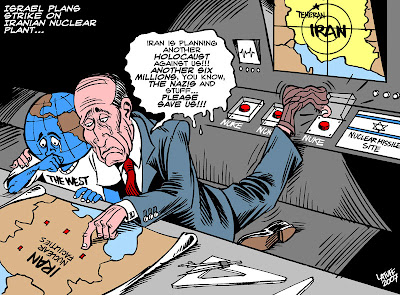 "03/06/2008 Israeli Prime Minister Ehud Olmert begins a two-day visit in Washington today, which will include an address at the annual gathering of AIPAC, the pro-Israel lobby, and a meeting with US President George Bush that will focus on the Iranian nuclear program and upgrading the bilateral defense ties between Washington and Israel.

The prime minister decided to travel to Washington in spite of the political crisis in Israel, because the security dialogue with Bush, which began when he visited Israel in January, requires attention, sources close to Olmert said Monday. During the cabinet meeting Sunday, Olmert said the security-related issues on the agenda with Bush addressed "the essence of Israel's existence."

In his meetings in Washington, Olmert will concentrate on the efforts to foil Iran's nuclear program. A senior political source said that Israel continues to emphasize, in contacts with U.S. officials, that Iran is developing military nuclear capabilities. "There is progress in the dialogue with the Americans, but no decisions are expected [to be made]," the source said.

Olmert will try to convince Bush to set aside the National Intelligence Estimate on Iran's nuclear program in favor of data presented by Israel, and determine the administration's policy on Iran accordingly. Another central issue in the talks will be upgrading defense ties between the two countries. A political source said that the projects in question are very sensitive and have to do with missile defense systems and advanced warfare capabilities that Israel would like to acquire in the coming years.

The United States is expected to allow Israel to participate in a number of advanced American defense industry projects. Olmert will also brief the president on developments in the indirect negotiations with Syria and the upcoming start of resumed talks, as well as the meetings with the Palestinian Authority. On Monday, Olmert met with PA President Mahmoud Abbas, and the two leaders discussed issues of borders and security."
Posted by Tony at 4:21 AM