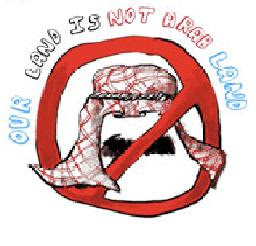 "Haaretz.com, the website of the Israeli newspaper often cited as an example of Israel's liberal, critical media carries paid advertisements from a website openly advocating the total destruction of the Palestinian people, the murder of large numbers of Muslim civilians, the assassination of the family members of Arab rulers, and the use of chemical, biological and nuclear weapons against dozens of countries.

The website, Samson Blinded, claims that Google banned its advertisements from its adwords program. If that is true, it would be consistent with Google's policy that prohibits advertising promoting violence or advocating against any group based on race, ethnic or national origin or religion. Yet the Samson Blinded advertisements appear prominently on the main page and article pages of Haaretz's website. For example the ad appeared on the front page of Haaretz.com on 1 June, and also prominently on an article page headlined "Who didn't attend New York's pro-Israel march? Israelis" on the same date.

Samson Blinded, whose publishers keep their identities secret, calls on Israel to eliminate all Palestinians from the territory it controls and to annihilate their culture. The site demands that Israel "destroy the Palestinian settlements [sic] and exile them far away -- not to refugee camps in neighboring Arab countries, or the conflict would be perpetuated." It argues that "Forced cultural assimilation of Palestinians should accompany deportation," adding that "With demise of Palestinians, Arab Israeli conflict would lose its impetus [sic].".......

This kind of militant Jewish extremism has been making steady inroads into Israel's political mainstream, as numerous parties openly advocate the "transfer" (expulsion) of Palestinians and Israeli leaders have done little to marginalize and discourage it. What is surprising is that the widely respected Haaretz, which publishes jointly in Israel with The International Herald Tribune, would profit from hate groups and their possibly criminal incitement......"
Posted by Tony at 9:21 PM