An award for the voiceless in Gaza 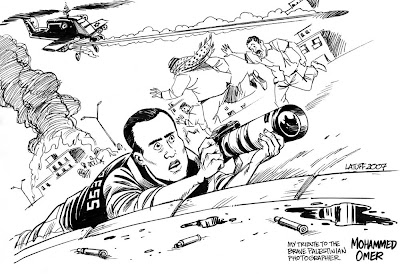 "....... Recently I returned from fieldwork to find cheerful news from John Pilger: that I have won the 2008 Martha Gellhorn Prize for Journalism, along with my respected colleague Dahr Jamail. This is the best news I have received for many months.

As I write, I am still thrilled and honored at such recognition. But since those first minutes during which it was explained that I would have to be in London by 16 June to receive my award, my thoughts have been racing, seeking a way to get out of Gaza. How can I get out at a time when Israel is not allowing even the most urgent medical cases to leave for treatment, a policy that, according to Gaza's ministry of health, has led to the deaths of more than 165 people? ..........

Life forced me, from an early age, to face in justice and oppression. I witnessed the killing of innocents and the demolition of houses in Rafah. And so, aged 17, I felt I had to become a journalist. Initially, I could do little more than observe. I had no camera, no computer, only a small notebook in which I wrote down what was happening. I would write articles and keep them as records, for myself. That notebook lies buried beneath the rubble of our demolished house.

One day in March 2003, I returned home to the debris of what had been my home, ravaged by Israeli bulldozers. They were making room for Israel's Iron Wall dividing Gaza from Egypt...... Two things remained: memory and hope. Memory of the past, and hope for the future.

Most of my brothers have been injured by Israeli forces during invasions. One was killed. Our house sits near the Gaza border. Until 2005, when Israeli troops technically withdrew from Gaza, our neighbors were Israeli tanks and bulldozers. We lived under occupation, and so I went on writing, reaching international newspapers and magazines around the world. To my amazement and dismay, not even local media reported the reality. The international press gave no coverage to daily demolitions and killings in Gaza. Instead, these injustices were met with deaf ears or had blatantly false reports.

My ambition was to get the truth out, not as pro-Palestinian or anti-Israeli, but as an independent voice and witness, posing questions and challenging international understanding. I wanted to give a voice to the silenced dead and to ordinary people still struggling: students, farmers, teachers, children, patients, refugees, etc......
Last year, I was invited to the Netherlands for a speaking tour. Incredibly, I was able to get out of Gaza, through Israel and over Jordan's Allenby Bridge, rather than through the Rafah crossing, which, though minutes from my home, was impossible to cross. I managed this with the help of Hans van Ballen, a Dutch member of parliament.

Now receiving the Martha Gellhorn award, an immense honor, is an additional reason to try to get out of Gaza once more. However, I fear that it may be impossible to voice my gratitude to the organizers and those who have supported me in person. But, prize or no prize, I will continue to tell the truth from Gaza, in the hope that one day we will be free of this deadly siege and be able to travel like any human being. "
Posted by Tony at 7:49 AM