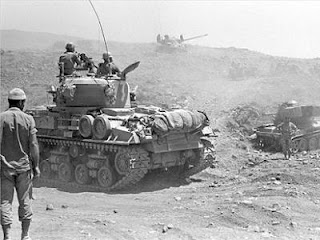 "Forty-one years ago this week, Israel launched the 1967 war that lasted only six days but it has changed the politics and geography of the region for ever. It left Israel in control of all historical Palestine, Egypt’s Sinai Peninsula, Syria’s Golan Heights, Lebanon’s Shebaa Farms and small areas to the East of the Jordan River. Thousands of Arab soldiers lost their lives and some prisoners of war were massacred by the Israeli army in cold blood. More important, the war put an end to the pan-Arab dream of President Jamal Abdel-Nasser of Egypt and Arab nationalists; and local patriotism has replaced Arab nationalism. The war set the stage for President Anwar Sadat peace initiative with Israel and King Hussein disclaim his sovereignty over the West Bank. The Arabs defeat in the 1967 war was a cause for casting doubts on the legitimacy of the Arab governments......."
Posted by Tony at 6:30 AM