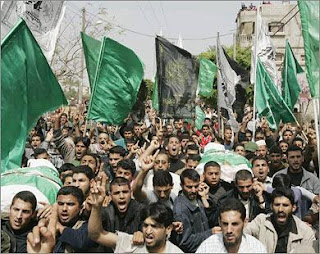 "Gaza has been turned into a ticking bomb ready to explode any day. This started with US/Israel/Abbas trio conspiracy, according to Vanity Fair magazine, to topple the democratically elected Hamas-led Palestinian government. This resulted into Palestinian division and the isolation of Gaza Strip. To finish off Hamas leadership Israel had borrowed Nazi siege tactics of Warsaw Ghetto, and implemented a stricter version of it against Gaza Strip. Israel had gradually decreased the imports of all vital substances to Gaza, and since June 2007 had completely closed Gaza’s five border crossings, leaving all 1.5 million Palestinians to die from starvation, thirst, pollution, and lack of medicine. Israel had cut off all fuel supplies to Gaza including all UN agencies such as UNRWA; the agency devoted to provide health, education and food supplies to poor families........

Like Egyptian president other Arab leaders had joined in the blockade against Gaza. Their main goal is to keep their own citizens subdued and obedient. They do not want any national movement to wake up their sleepy citizens. As for their Palestinian brothers, they consider them citizens of another country. Some of the leaders lack the political will to help, others are under the mercy of foreign hostile pressures, while others are just as Zionist as the Israeli government.
Hamas orchestrated protests and marches towards border crossings demanding end of blockade but Israeli army met the peaceful marchers with live ammunitions and tear gas killing and wounding scores of them.

Worst from death itself is watching your young children, your old parents, and your siblings die of starvation, lack of medicine, and on the hands of Israeli terrorist army. Abandoned and pushed to die in a corner without any alternative Gaza Palestinians will not take it silently. They prefer to die struggling for their rights and for their freedom. This is the only choice left for them. So we have seen lately some military operations against Israeli occupation forces on border crossings. Soon every body in Gaza will join in and we could witness an armed Intifada. The imminent Gaza explosion is coming, and its effects will touch everybody; Israelis, Arabs, and internationals."
Posted by Tony at 6:07 AM