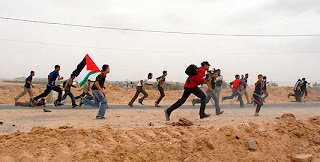 Hamas says it retains the support of the Palestinian people despite facing an Israeli blockade on Gaza and an international boycott.

""If elections were to occur tomorrow, we would win," Mahmoud Zahar, the co-founder of Hamas, the largest Palestinian Islamist resistance movement, told journalists.

"Support for Hamas is much greater than most people think.".....

By June 2007, hundreds of Palestinians had been killed in months of factional street fighting. "Last year was the first time for Palestinians to get themselves involved in civil battle," Zahar said of the street battles.

He blames Fatah for allowing US foreign policy to steer their control over the West Bank. In April 2008, Vanity Fair ran The Gaza Bombshells, an article that exposed a US plot to overthrow the elected Palestinian government based on leaked documents and interviews with key players in the Bush administration.

Leaning forward in his chair, Zahar said: "What came out from Vanity Fair was a perfect example of how regressive and harmful Fatah was in hurting the Palestinian cause."

"So, we are not ready to meet with Fatah because such meetings should be fruitful and constructive for the Palestinian people."........

Zahar explains that the acts of aggression carried out by Fatah in Palestinian cities such as Ramallah went as far as the "killing of innocent people ... or they shoot at students in university".
"So, I can see how the Palestinian people in the West Bank would not vote for Fatah because of their co-operation with Israel"......

Addressing Arab leaders in a recent meeting in Qatar, Tipsivi Livni, the Israeli foreign minister, said that Israel was ready for a two-state solution. But Zahar believes Israel's "solution" is a trick.

"Livni thinks we are ready to except two states- but where are the borders? Who is the citizen? We don't trust statements made by Israeli officials," he said.

"I have travelled through the tunnel of the Oslo Accords, the peace negotiations in Madrid, conferences in Paris, Sharm El Sheikh, Taba, everywhere you can think of. What two state solution is she be talking about?" he said......"
Posted by Tony at 5:26 AM