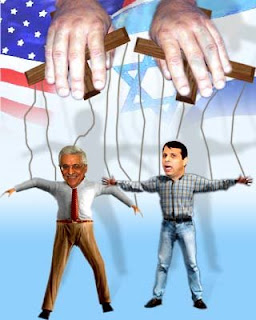 "......."The meeting," said Barhoum, "provides Olmert with a lifeboat. These meetings don't serve the national interests of the Palestinian people and only give Israel cover under which it can continue to grab more Palestinian land and murder more Palestinian civilians while at the same time claiming to be involved in a peace process with the Palestinian leadership."

Olmert is reported to have told Abbas that he remained committed to efforts to reach a draft peace agreement with the Palestinians before the end of 2008, despite the difficulties he is facing. He also suggested that the Palestinians should moderate their demands by taking "various realities" into account.

"Olmert and Abbas and everyone else, save the stupid and dishonest, know deep in their hearts that the talks are hopeless."

Al-Masri told Al-Ahram Weekly that Israel is now in a pre- electioneering phase and that neither Olmert nor any other Israeli leader is able to reach a peace agreement with the Palestinians under current political circumstances.

"I think Abbas should have concluded that these peace talks are futile a long time ago. The fact that he didn't and is not about to do is undermining his stature as well as that of Fatah in the eyes of the Palestinian people."

Abbas, he added, has placed all his eggs in the bottomless American-Israeli basket. "So what is he going to tell the Palestinian masses six months from now, when his term as president of the PA expires?""
Posted by Tony at 5:14 AM