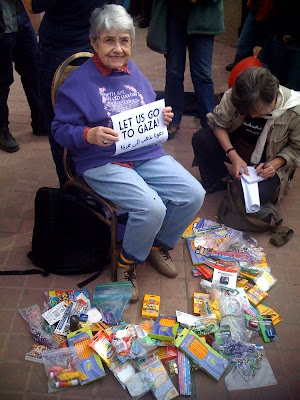 By Ali Abunimah
(Ali is in Egypt, with the Gaza Freedom March (GFM). He will keep updating us with the latest news and photos.)

"Hedy Epstein, the 85 year old Holocaust survivor and peace activist, announced that she will begin a hunger strike today as a response to the Egyptian government’s refusal to allow the Gaza Freedom March participants into Gaza.

Ms. Epstein was part of a delegation with participants from 43 countries that were to join Palestinians in a non-violent march from Northern Gaza towards the Erez border with Israel calling for the end of the illegal siege. Egypt is preventing the marchers from leaving
Cairo, forcing them to search for alternative ways to make their voices heard.

Ms. Epstein will remain outside the UN building at the World Trade Center (Cairo) - 1191 Cornish al-Nil, throughout today, accompanied by other hunger strikers. "It is important to let the besieged Gazan people know they are not alone. I want to tell the people I meet in Gaza that I am a representative of many people in my city and in other places in the US who are outraged at what the US, Israeli and European governments are doing to the Palestinians and that our numbers are growing," Epstein said.

In 1939, when Epstein was just 14, her parents found a way for her to escape the persecution, sending her on the Kindertransport to England. Epstein never saw her parents again; they perished in Auschwitz in 1942. After World War II, Epstein worked as a research analyst at the
Nuremberg Trials of Nazi doctors who performed medical experiments on concentration camp inmates.

After moving to the US, Epstein became an activist for peace and social justice causes. Unlike most Holocaust survivors, one of the causes she has taken up is that of the Palestinian people. She has traveled to the West Bank, collected material aid and now she hopes to enter Gaza."
Posted by Tony at 11:29 AM