Walls never work: in the Middle East or in Ireland

Israel’s illegal claim to West Bank Arab land is based on holy texts, not on a king’s fiat 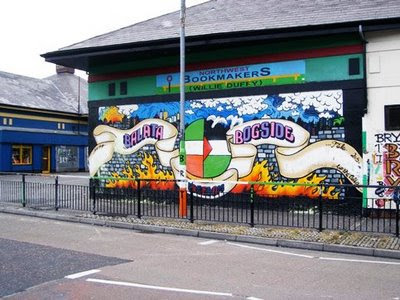 A mural in Derry, Northern Ireland commemorates solidarity between Palestinians and Irish nationalists.

".....The story of the Protestant "settlements" in Ireland provides a ghostly narrative of those modern-day "settlements" in the West Bank, where the Israelis insist on fighting the world's last colonial war with the assistance of that great anti-colonial nation known as the United States.

The differences, of course, are legion. Protestantism, in its various Irish forms, aimed to convert or ethnically cleanse the Catholic Gaels. Judaism does not attempt to proselytise – quite the contrary – and Israel's illegal claim to West Bank Arab land is based on holy texts, not on a king's fiat......

....just as West Bank Palestinians are supposed to believe that, since 1967, they have lived in Judea and Samaria). "But all such previous plantations had in the end been failures," writes Kee. "Collapsing for lack of human support or capital, or else being physically wiped out by the rebellion of those who had been dispossesed to make room for them."

This remains Israel's fear: that those Palestinians dispossesed in 1948 will return to take their former lands in what is now the State of Israel, or at least those lands stolen from them in the West Bank after 1967.......

But the Elizabethan settlers came as soldiers who settled. Later Scots Protestants came, like Israelis to the West Bank, as settlers prepared to be soldiers. "The idea of the settlement of underpopulated lands caught the imagination of men in both countries" – I am quoting Perceval-Maxwell's work on Scottish migration, but "making the desert bloom" and "a land without people for a people without land" echoes in the future distance.....

The slaughter at Drogheda and Wexford acted as a catalyst of mass fear, much as the killings at Deir Yassin and many other Arab villages in 1948 led to the abandonment or capitulation of hundreds of other Arab towns in the land that was to become Israel. Most of the best land of Ireland, at least three-quarters of it, was confiscated from its Catholic owners, its original inhabitants expelled to the cold, wild lands of Connaught. By 1688, Catholics held only 22 per cent of the original Gaelic Ireland, precisely the same percentage of mandate Palestinian land – 22 per cent – for which Yassir Arafat was required to negotiate in the hopeless Oslo "agreement". Arab-owned land in "Palestine" is now smaller still, heading inexorably to the mere 14 per cent that the Catholics still clung on to in 1703.....

....So, later Protestant "settlements" were surrounded by vast defensive walls, angled with watch-towers and ramparts and gun positions. The city of Derry has walls above the Catholic Bogside every bit as ferocious as the Israeli wall that now cuts into yet more Arab land..... 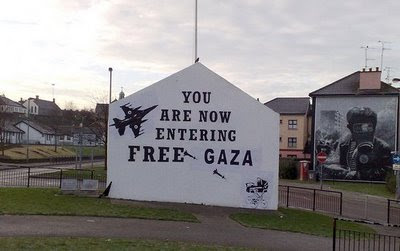 But the English and Scots "settlements" failed in Ireland. Protestant hopes of eternal support from London eventually proved false. And so, what of Israeli hopes of eternal support from Washington? I still don't believe in a one-state solution – which the Protestant minority will one day have to accept in Ireland, if they have not, subconsciously, already done so – but colonisation leads only to the graveyard. Walls don't work. Nor "superior" religions. Nor ethnic cleansing. History, which should be studied as eternally as false hopes, is a great punisher. " 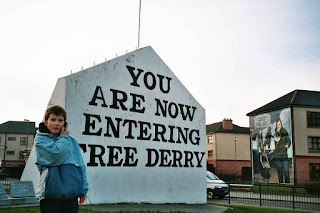