KEEP UP WITH THE LATEST....
FROM ALI ABUNIMAH IN CAIRO 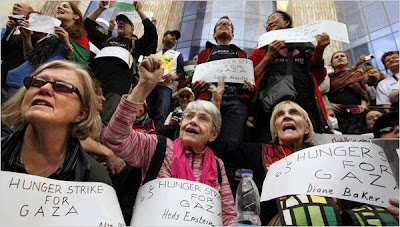 "Gaza 30.12.2009
Over the past week we, representatives of various civil society sectors in Gaza, have been humbled by the sacrifices that you, 1400 people, have made in order to come and support us in breaking the siege.
Despite our grave disappointment that we can not yet meet you all that we are still separated by this medieval siege we feel that your arrival in Cairo has already borne fruits. Your insistence to break the siege in order to be in solidarity with us has inspired many and shamed many others. Thanks to your presence with us, a network to break the siege and free Palestine has been established.
We support any decisions taken by the Gaza Freedom March Coordination Committee about the entry of just 100 of 1400 delegates into Gaza instead of all the delegates presently in Cairo. Obviously it is, as all previous decisions, a majority decision. We, at the Gaza- GFM Steering committee have reiterated our position, namely, that it is up to The Gaza Freedom March Coordination Committee in Cairo to decide. We initially felt that if representatives of all forty some countries can go to Gaza and join a march along Palestinians it would convey a very strong message to the world public opinion. Had they decided to go through with the Egyptian offer, we would have welcomed them in Gaza and deeply appreciated their solidarity.
The decision to send 100 delegates, however, seemed too divisive for the growing solidarity campaign with the Palestinian people. The unity of the global solidarity campaign is of utmost importance for us, the besieged Palestinians of Gaza. We have repeatedly argued that the march itself is not supposed to be only a symbolic gesture, but rather a part of a series of events which will lead to the end of the siege, once and for all. We want to intensify and continue building the solidarity campaign, not divide it.
We salute the GFM delegates and thank them for the tremendous amount of work they have been doing and whatever decision they came up with.
Gaza-GFM Steering Committee
Gaza "
Posted by Tony at 10:01 AM