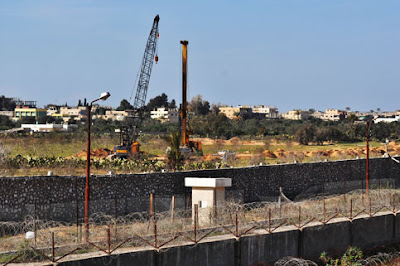 ".....My father, as many in his generation, fought in the Egyptian army and the Palestinian Liberation Army. Following defeat in the war of 1967, he was hauled along wounded and dead Egyptian soldiers across Sinai, as well as on a floating army bridge over the Suez Canal under intense Israeli aerial bombardment. As a child, I once accompanied him on a journey to an impoverished neighborhood in Cairo to look for an Egyptian war buddy of his. When we found out that he was long dead, my father wept. Confused and scared among the ailing buildings, I too cried. Indeed, the bond between Egyptians and Palestinians is historical, everlasting, cemented in blood, sweat and tears.

Yes, everlasting, despite the responses of the Egyptian government to the more recent suffering of Palestinians in Gaza......

More recently, news of an enormous metal wall that Egypt erected at its border with Gaza has come to the fore. The Egyptian decision is both politically and financially loaded. Considering that the US – spurred on by Israel – has strived to develop ways to completely choke Gaza, one can safely conclude that the decision has not come solely from Egypt, though as a sovereign country the latter must still be held fully accountable. According to Press TV, Karen Abu Zaid, United Nations Relief and Works Agency Commissioner-General described the wall as more dangerous than the Bar Lev Line, which was built by Israel along the eastern coast of the Suez Canal following the capturing of the Sinai Peninsula from Egypt in 1967. The Egyptian wall is arguably more dangerous because it will increase the suffering of an already tormented civilian population.

But more than dangerous, it is also disheartening. Palestinians, including some in the Hamas government never cease to refer to Egypt and Egyptians as “Sister Egypt” and “Egyptian brethren”. Why then are Sister Egypt and the Egyptian brethren taking part in this injustice and allowing Israeli violence to perpetuate? Money? Political validation? Attempts at regional relevance and fear of dismissal if they dare defy Washington’s will?......"
Posted by Tony at 9:34 AM