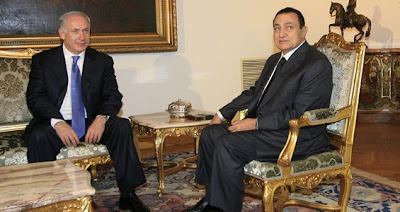 The Pharaoh Receiving His Instructions.

"The ongoing tragicomedy on the Gaza Egypt borders will not have a happy ending.

A year after Israel's war left Gaza in ruins, Egypt is hampering international aid convoys from entering this impoverished refuge camp of 1.5 million and is erecting an 'iron wall' under the guise of preserving its national security and sovereignty.

But it could be doing the opposite.

As Egypt distances itself from the problems of Gaza as if it were a strategic liability, instead of championing the humanitarian and political cause of occupied Gaza, it is arguably missing an opportunity to regain its long lost regional leverage.

Over the last several years, Egypt has seen its role greatly diminished. The regime's preoccupation with its own stability and succession and the rise of regional powers, like Iran and Turkey, against the backdrop of unprecedented foreign military intervention in the region, have all shoved Egypt to the sidelines......"
Posted by Tony at 11:47 AM