Fatah Warns of 3rd Intifada - This Time Directed against PA 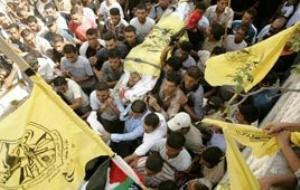 "28/12/2009 The killing of the three Fatah operatives in Nablus by the Israeli occupation army over the weekend could trigger a third intifada, Fatah officials warned on Sunday.

But the new intifada, they said, would be different from the first two -this time it would be directed against the Palestinian Authority.

During the funerals of the three men, all veteran members and leaders of Fatah's armed wing, the Aqsa Martyrs Brigades, thousands of Palestinians chanted slogans accusing the PA of collusion with Israel and calling for an end to security coordination with Israel and the dismantling of the PA.

For several hours during the funerals, which took place in Nablus, it seemed as if the PA and not the Israeli occupation army had killed the three men. It was, in the words of a local journalist, "one of the biggest anti-Palestinian Authority demonstrations" in many years.

The relationship between the PA and local Fatah activists has always been tense. Nablus and its surrounding refugee camps, especially Balata refugee camp, has long been a stronghold for disgruntled Fatah fighters who occasionally vent their frustration against the PA leadership and security forces......

The killing of the three men is now being exploited by leading figures in Fatah to incite against the PA leadership in Ramallah. One of the main instigators is Husam Khader, a charismatic and extremely popular Fatah operative from Balata who has long been attacking the PA and its security forces, accusing them of financial and moral corruption and collaboration with Israel.
Khader and another senior Fatah operative, Kadoura Fares of Ramallah, are convinced that continued cooperation with Israel on security matters would eventually turn Palestinians against the PA leadership. The two, along with many of their followers in Fatah, believe that a third intifada is on its way, but that this time it would be directed against the PA and not Israel."
Posted by Tony at 4:02 AM