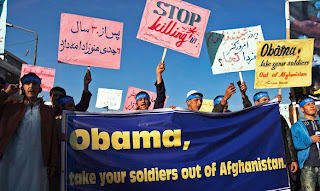 "American-led troops were accused yesterday of dragging innocent children from their beds and shooting them during a night raid that left ten people dead.

Afghan government investigators said that eight schoolchildren were killed, all but one of them from the same family. Locals said that some victims were handcuffed before being killed......

“The delegation concluded that a unit of international forces descended from a plane Sunday night into Ghazi Khan village in Narang district of the eastern province of Kunar and took ten people from three homes, eight of them school students in grades six, nine and ten, one of them a guest, the rest from the same family, and shot them dead,” a statement on President Karzai’s website said.

Assadullah Wafa, who led the investigation, said that US soldiers flew to Kunar from Kabul, suggesting that they were part of a special forces unit......"
Posted by Tony at 4:49 PM