Shame On Them - From The Streets Of Cairo 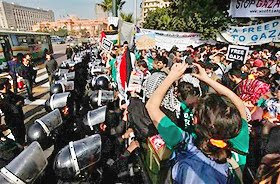 By Dave Bleakney
(Dave Bleakney is a national representative with the Canadian Union of Postal Workers, currently writing from Cairo.)
Znet

"(Cairo) -- People are surrounded. Some have been beaten and injured. Women for Gaza stand surrounded in front of the Hotel Lotus. Canadian postal workers hold their flags high. Locals on the street pass discreetly while giving thumbs up. In contrast, the marchers who were able to get out of their hotels and hostels this morning and planned to start a march to break an illegal siege and deliver aid to the people of Gaza have been beaten, terrorized, and denied food, water or bathroom privileges. The demonstrators near the Egyptian museum are confined by rows of serious looking riot police and scores of plainclothes agents who direct everyone away from the scene and confiscate cameras.

Presently it is impossible to get an interview with any demonstrators. Even the Reuters team, backed by their large media apparatus, has been refused contact. Canadian reporters, like their embassy, were nowhere to be seen as recently as an hour ago, their silence indicating "a slippery slope to incompetence or fascism" as one put it.......

Such are the results of the policies of the United States and Israel, directing the Egyptian government, a government lacking integrity and independence which requires a massive police apparatus to control the population whether through religion or hate while the people of Gaza starve. Ten percent of children in Gaza currently suffer from severe malnutrition. People here now surrounded by police are prevented from delivering food, medicine, and school supplies and are beaten for it.

This New Year we shall all create our Gaza Freedom Camps.