Gaza's writing on the wall 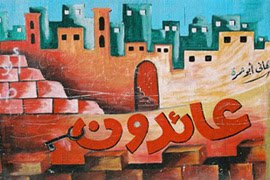 "For years, law enforcement agencies throughout the world have engaged in local crusades against what they regard as the scourge of graffiti......

But when it comes to the Israeli occupied and blockaded Gaza Strip, local government not only tolerates graffiti, but actually provides workshops on how artists can improve their technique.
Part propaganda, part art......

Gaza's graffiti culture has just been documented in a new book by Swedish radio and photo-journalist Mia Grondhal, who has been visiting and reporting on the region for more than 30 years. Although never previously the focus of her news reporting, Grondahl began paying closer attention to Gaza's graffiti during the second Intifada when she became increasingly impressed with its evolving quality.

"It was some of the best graffiti I've seen, especially the calligraphy," notes Grondahl.

"This is mainly the work of Hamas who are very careful about how they write the Arabic language. Fatah artists do not feel the same because they are a secular party, and to them it's not so important how you write, but what you write."

For Grondahl, Gaza's graffiti tells a story that goes beyond the typical catchphrases that tend to be repeated about the Strip and its people. "Gaza's graffiti is so integrated into the society which makes it very interesting. You're not out there tagging just for yourself. You are tagging for the party you belong to, the block you belong to, for a friend who is getting married, or a friend who was killed. It's an expression of the whole range covering life to death.""
Posted by Tony at 4:02 AM