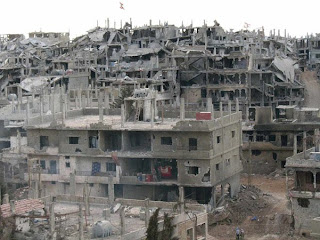 "NAHR AL-BARED (North Lebanon), Dec 29 (IPS) - The hip-hop beats ringing through the muddy, unlit streets of this burnt-out Palestinian refugee camp seem incongruous. But the rhymes are camp-grown - and courageous.

"I'm carrying worries / From inside a destroyed camp / I'm preparing an attack / Words that keep turning in my head / Nahr al-Bared is fenced-in with iron bars / In the newspapers they speak about suffering / Every word makes sense".

Farhan Abu Siyam, 21, is Nahr al-Bared's first and only rapper. Going by the name of MC Tamarrod (which translates as MC Rebellion), he grew up in the Palestinian refugee camps of Nahr al-Bared and Bourj al-Barajneh.......

Palestinian youth do not see a future in Lebanon and see emigration as a way out. When a delegation from donor states recently visited Nahr al-Bared, the residents of the temporary housing units did not ask them for more aid, but for visas allowing them to emigrate.

In Nahr al-Bared the slow reconstruction and the continued presence of the LAF have led to widespread unemployment......"
Posted by Tony at 6:49 AM