Vanunu: our duty to speak up 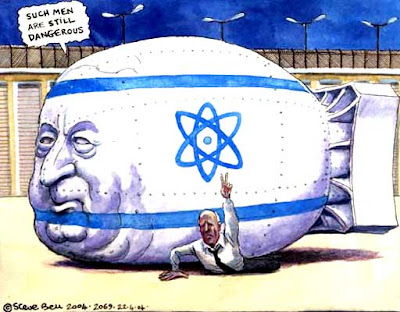 The absurd persecution of nuclear whistleblower Mordechai Vanunu did not relent on his release
Duncan Campbell
The Guardian, Saturday 2 January 2010
"More than five years ago, Mordechai Vanunu, a former technician at the Israeli nuclear facility in Dimona, was released from prison after serving 18 years for revealing Israel's nuclear weapons secrets. This week he was arrested again in Jerusalem, accused of talking to foreigners, in breach of conditions imposed on his release.......
What happens to Vanunu is important for Britain and the British press. It was to London and the Sunday Times that he came with his story. It was from London that the first stage of his illegal kidnapping took place. The foreign secretary has this week rightly protested on behalf of Akmal Shaikh, executed for drugs smuggling in China. There is a similar duty to speak up on behalf of a man who trusted that Britain was a place where he could safely tell the world about the proliferation of nuclear weapons. As Yossi Melman wrote in Haaretz at the time of Vanunu's last arrest: "In a proud country that purports to observe the judicial and moral norms of the enlightened world, one might have expected it to take courage and allow Mordechai Vanunu to be free once and for all.""
Posted by Tony at 6:56 AM