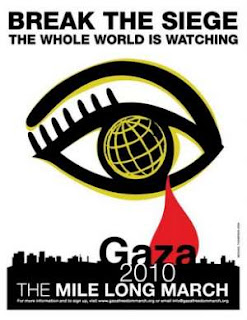 (Jean Athey is a retired grandmother of six who lives in Brookeville, MD. She is coordinator of Peace Action Montgomery, a local volunteer peace group in Montgomery County, MD.)

"We are in the Middle East, seeking a nonviolent solution to the blockade of Gaza. Free Gaza actions are occurring all over Cairo, and so the police, who are often in riot gear, have had a busy day—they show up wherever we go. They are incredibly young, maybe 18 or 19.

Typically, they surround us with moveable steel fences, which they line up behind and they watch us with what seems to be curiosity, not malice. However, their innocent appearance doesn't mean they won't become aggressive; police today were very rough with several Spanish protesters. As internationals, though, we have great protection not enjoyed by locals. Some Egyptians have joined in these protests, and we find their courage astounding.

This morning, I was at the U.S. Embassy with a group of about 40 other Americans. We went hoping to see the Ambassador, but instead we were surrounded by Egyptian police in riot gear and kept penned in for some five hours. The police told us that they did this at the behest of the American Embassy, but later the "political security officer" of the Embassy denied it. So, who is lying?....

Is this change we can believe in?

We ask our government to live by the words of our President and to help us end the illegal and immoral siege of Gaza."
Posted by Tony at 10:09 AM