Tony's Fatwa: Tantawi is an Accessory to a War Crime; Haul Him to Stand Trial in The Hague. 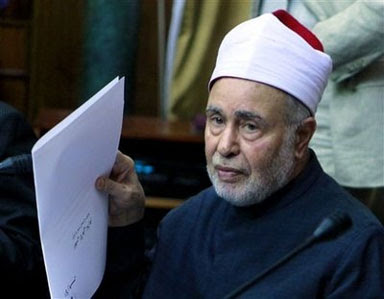 Think about it. Not only this paid mouthpiece of the Pharaoh supports the construction of a steel wall, above and below ground, to complete the total blockade and literal starvation of 1.5 million Palestinians. No, he goes one step further. In his Fatwa he is quoted as saying, "...those who oppose building this wall are violating the commands of Islamic law!"

So, in his opinion if you oppose a war crime against an entire people, then you are "violating the commands of Islam!" He is using fear, hate and religious bigotry and lies to incite for the mass killing of an entire population.

Enough said already. Using his own words, there is enough evidence to convict him of war crimes and crimes against humanity.
Haul his ass to The Hague, now!
Posted by Tony at 1:58 PM