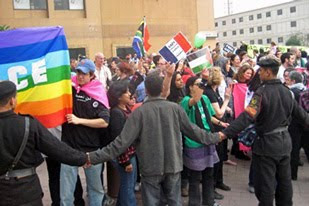 "Members of an international group gathered in Cairo to protest against the siege of Gaza have rejected an Egyptian offer to allow 100 of them entry into the Palestinian territory.

Organisers of the Gaza Freedom March (GFM), which is comprised of 1,300 people from 42 different countries, declined the offer on Wednesday, saying "we refuse to whitewash the siege of Gaza".

Egyptian authorities had initially said the group would not be allowed to cross the border, citing security reasons and a "sensitive situation"......

March organisers had called the Egyptian government's concession a "partial victory" but said the offer was not sufficient.
Ali Abunimah, co-founder of the Electronic Intifada and a participant in the march, posted to his blog, saying that "it's not enough and the pressure and protests should be kept up".
"However, getting 100 or 1,300 into Gaza does not end the siege by itself. This is not about getting some or even all into Gaza, its building global support and pressure to end the siege of Gaza," he said......
A separate aid convoy, which had been trying to reach Gaza by way of Jordan's Red Sea port of Aqaba, has meanwhile agreed to travel via Syria instead. The Viva Palestina convoy, carrying 210 lorries full of humanitarian aid for the people of Gaza, crossed into Syria on Tuesday after spending five days in Jordan, negotiating with the Egyptian consul there.
It is now expected to set sail from the Syrian port of Latakia to the Egyptian port of El Arish on the Mediterranean, and then cross through Rafah into Gaza from there......"
Posted by Tony at 7:22 AM