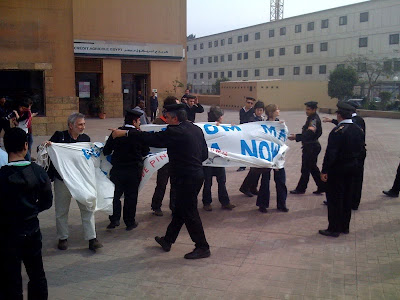 (left: Cairo - police prevent Gaza protestors from holding banner up where it can be seen by passing cars #GFM)

"CAIRO (IRIN) - More than 1,000 persons from 42 countries who have vowed to travel from Cairo to the Gaza Strip on 31 December in a bid to highlight and break the Israeli economic blockade, will be prevented from carrying out their mission, according to the Egyptian authorities.

The protesters hope to bring aid to the 1.5 million residents of Gaza a year after Israel's 23-day offensive ended on 18 January 2009.

"It's a shame on Egypt to prevent these people from entering Gaza, which has been suffering this Israeli blockade for a long time now," Diaaeddin Gad, a spokesman for the activists, told IRIN.

On 27 December, the marchers were prevented by police from floating 1,400 candles on the River Nile to commemorate the deaths of 1,400 Palestinian victims of the offensive......."
Posted by Tony at 2:32 PM