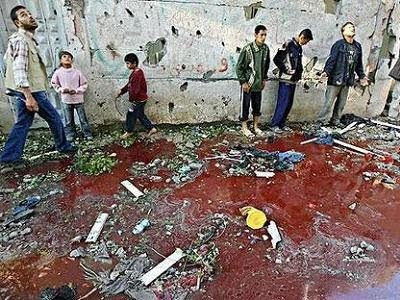 "....As decent and honorable citizens of the world, we too need to speak out in shame at what we have allowed to occur for far too long. Terrible crimes have been committed and some predict that even more terrible ones are to come. The reality is that all along we have been witnessing a slow genocide and we have allowed guilt, pragmatism and self-interest to stand in the way of our common humanity. The world needs to say "enough" and refuse to indulge Israel's Zionist leaders and advocates whose free ride has taken them to the heady heights of arrogance. That universal effort needs to begin before the bitter winter freezes any kind of hope in Gaza and it needs to be sustained for as long as it takes to free all of Palestine. Anything less, will hasten a 21st century genocide. "
Posted by Tony at 6:28 AM