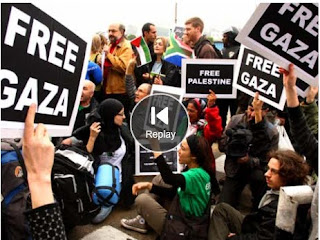 "Large numbers of Egyptian riot police blocked the demonstration near the Egyptian Museum in the city centre and contained the protesters by the side of the road.
Around 1,400 activists from 43 countries arrived in Egypt last week to commemorate the first anniversary of Israel's 2008 attack on Gaza."