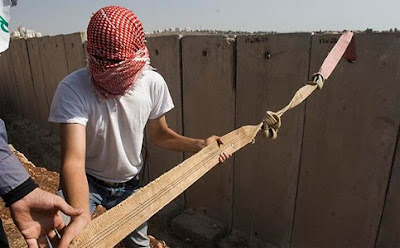 "..... Faced with growing global recognition and support for the courageous nonviolent struggle against continued land theft in the West Bank, Israel is escalating its violence and kidnapping of leaders of the movement in Bilin and other villages (Mohammad Othman, Jamal Juma' and Abdallah Abu Rahmeh are among the leaders of this movement recently arrested).
In acting this way, Israel increasingly resembles a bankrupt failed state, not a regime confident about its legitimacy and longevity.
And despite the failed peace process industry's efforts to ridicule, suppress and marginalize it, there is a growing debate among Palestinians and even among Israelis about a shared future in Palestine/Israel based on equality and decolonization, rather than ethno-national segregation and forced repartition.Last, but certainly not least, in the shadow of the Goldstone report, Israeli leaders travel around the world fearing arrest for their crimes.
For now, they can rely on the impunity that high-level international complicity and their inertial power and influence still afford them. But the question for the real international community -- made up of people and movements -- is whether we want to continue to see the still very incomplete system of international law and justice painstakingly built since the horrors of the Second World War and the Nazi holocaust dismantled and corrupted all for the sake of one rogue state.
What we have done in solidarity with the Palestinian people in Gaza and the rest of Palestine is not yet enough. But our movement is growing, it cannot be stopped, and we will reach our destination."
Posted by Tony at 11:50 AM