Leaving Cairo, but taking the struggle with me

By Ali Abunimah, in Cairo 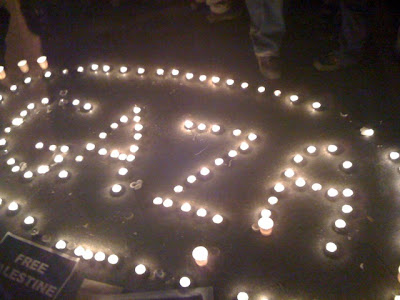 A picture from last night's vigil in Tahrir Square

"Today I leave Cairo after four intense days with the Gaza Freedom March. We did not fulfill our goal of reaching Gaza and being with the Palestinian people there. That was surely painful and disappointing. But that is not the measure of what happened. To talk about the siege of Gaza in the abstract is one thing, but to actually come to Egypt and find that Gaza is harder to visit than a prison is like a bucket of cold water. The Egyptian government may be efficient at few things, but it is highly efficient at maintaining the siege. Buses hired to take all the marchers to Gaza were prevented from showing up. Those who tried to get to Gaza under their own steam were turned back or detained at their hotel in Al Arish. It was very very frustrating. But whatever frustration we felt is one millionth of the frustration of the besieged Palestinian people in Gaza. So perhaps in some way it is better then that we did not get in, because Egypt gave us a small taste of what it serves every day to people in Gaza -- and a small taste of what Egyptians face when they challenge their government's policies.

But the actions at the French, American and other embassies underlined that the siege is not Egypt's policy alone -- far from it -- it is imposed first and foremost by Israel, but with the full complicity of North American, European and other governments. In our meeting at the US Embassy, it was confirmed that the US Army Corps of Engineers is assisting Egypt to build the underground barrier designed to prevent Palestinians breaking the illegal blockade by digging tunnels. So there is a lot of work to do expose and oppose this criminal complicity.

Being in Cairo with so many people from so many countries for the Gaza Freedom March was inspiring, exhausting, chaotic at times, amazingly organized and coherent at other times. People came with so much determination. Many I spoke to said they would go back to their countries with many new contacts and networks, and more determined than ever to work in support of Palestinian people in Gaza to break the siege.

This morning as I left, delegates were meeting to discuss and (hopefully) adopt a declaration drafted at the initiative of the South African delegation, endorsing and affirming the goals and tactics of boycott, divestment and sanctions that Palestinian civil society has called for. I had to get to the airport, so I could not stay for the meeting, although I strongly endorsed the draft I saw. In the car to the airport, I saw the action at the Journalists' Syndicate I posted about earlier, and perhaps there will be other actions in Cairo today. Unfortunately I won't be there to witness them -- if they occur -- but like others I met, I will be taking the struggle with me."
Posted by Tony at 10:08 AM