Winding Our Way to Gaza 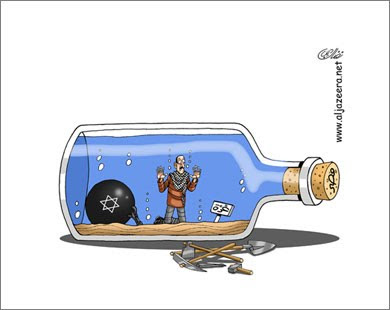 By EMILY RATNER
(Emily Ratner is an organizer and mediamaker based in New Orleans. In June she traveled to Gaza with a New Orleans delegation.)
CounterPunch

"Yesterday we joined the people of Gaza, the people of all of Palestine, and allies around the world in remembering the anniversary of the inhuman and illegal Israeli attacks that stole the lives of more than 1,400 mothers, fathers, daughters, and sons last December and January. And, in a manner far too appropriately suited to remembering an unfathomably vicious massacre and the preposterous silence of the American and Egyptian governments, we freedom marched in circles throughout the streets of Cairo.

The Egyptian government has revoked the contracts for the buses that would take us one step closer on our journey to Gaza and has forbidden us from leaving Cairo. Military police have torn down our small hand-written cards tied to the Kasr al Nil Bridge, following the Israelis' lead in trying to disappear the names and numbers of Gaza's martyrs. Candles meant to float along the Nile in remembrance are still in their boxes, their hundreds of distributors never permitted to board the feluccas (river boats) waiting just beyond overwhelming security forces. We regroup, circle again, and find another path to remembering and reminding, another way through the many checkpoints and the impossible border ahead.......

And so we freedom march in circles, planning, dodging, regrouping, often failing, sometimes succeeding, and then circling again. Joining our friends in Gaza for the Freedom March on December 31st is possibly nothing more than a dream now, but in these long days we take lessons from our Palestinian mentors, who have walked far more treacherous circles than ours. And we march with them in Cairo and in dozens of cities across the globe as we demand that the Israeli, American, and Egyptian governments listen to the people of the world and set Gaza free."
Posted by Tony at 9:23 AM