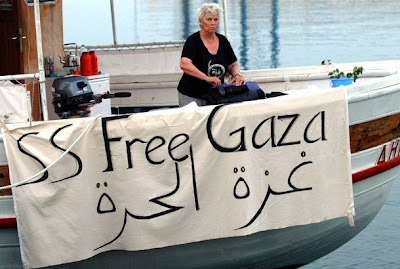 Written by Mary Hughes Thompson, part of the GFM convoy that has been trying to get into Gaza.
01 January 2010

"In about an hour the Gaza Freedom Marchers in Cairo will be meeting in Tahrir Square to celebrate the beginning of 2010. January 1st will be the fifth day of my hunger strike.

It was an eventful and exhilarating day for all of us here in Cairo. This morning we began to arrive in small groups at a couple of locations in downtown Cairo, intending to join up and begin a solidarity march to Gaza. We didn't expect to get far before being stopped, so we took what things we had that would make it easier to spend the night in the street. As soon as we got out of our taxi near the Museum, Hedy (Epstein) and I and Hedy's two friends from St Louis were immediately surrounded by security police who tried to lead us away from the area.

All around us we saw other small groups receiving the same reception. After sitting on a bench in front of the Nile Hilton for half an hour, with half a dozen police standing close and trying to persuade us to continue walking away, we suddenly saw a surge of people crossing the street a few yards from us, and we quickly rushed to join them. Free Gaza signs appeared, chants of "Free Gaza" were heard. Passengers in cars and buses gave us a wave and a smile. We were immediately encircled by several hundred policemen who placed barriers around us and began to push us more tightly together. We tried to keep space around Hedy, as we were pushed and squeezed. I feared my ribs would be crushed as I was squeezed tighter and closer to people around me. A few people fell or tried to sit in the middle of the circle and the police went after them.

Suddenly I was pushed to the ground and fell flat on my face. As people around me were pushed more tightly to the center, I feared I would be trampled. Perhaps the police thought I had been sitting, because they grabbed my arms and began to drag me along the ground. I felt my one shoe fall off, then the other I tried to hang onto my things as some French people came to my rescue, reaching out to help lift me to my feet, then leading me away next to the wall and away from the police.

My shoes and my cane were swallowed up and could not be located amid the mass of people. We stayed together for many hours, held tightly in our circle by the police. It was very warm, but as always spirits were high, some enormous signs were raised by young men who climbed the only tree we had in our enclosure. It was a laurel tree, and many people raised branches above their heads as we called for peace and freedom for Gaza. At the moment we knew the march was taking place inside Gaza we chanted again: Free Gaza, Free Gaza. Someone began to play an accordian, and I was pulled, shoeless, into a circle of women, including Hedy, as we danced in a circle while people around us cheered.

Eventually, after several hours, some members of American Veterans for Peace who had been watching over Hedy persuaded her it would be safer if she left. They felt the police were getting more threatening and were worried they wouldn't be able to keep her safe if we were rushed and attacked. Hedy reluctantly agreed to go outside the circle to talk to some press who wanted to interview her, so Hedy, Sandra, J'Ann and I were, after some negotiations, escorted outside where Hedy was greeted by reporters.

So here I stay in Cairo, grateful to be merely shoeless, somewhat bruised and only slightly battered, still strong and determined, proud and humbled to be a part of this amazing family that has come together from around the world to stand in solidarity with Gaza, Palestine and to remember what happened in Gaza a year ago. We may not get to Gaza this time, but we believe we have made a joyful noise in Cairo.