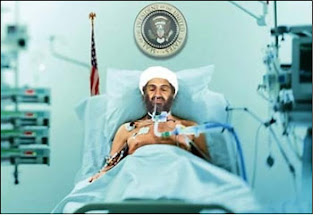 "......Meanwhile, we are expected to believe the Israeli-intelligence connected SITE Institute “hacked into an Al-Qaeda server and was monitoring it for a year for information on suicide bombers and spy codes,” as apparently the “al-Qaeda” IT guys are stumbling buffoons. “When the server turned up a new Osama bin Laden video ahead of its official release last month, SITE told two members of the Bush administration so that they could prepare for the release,” writes Nick Farrell for the Inquirer. “Although they told them on the condition that their hack remained secret, within an hour the site had been visited by 16 Intelligence Agencies and two telly channels,” obviously catching the “al-Qaeda” geeks by surprise, as usual.

If you believe any of this, I have a bridge for sale.

More likely, the server is owned by Mossad, the CIA, MI-6, or some amalgamation, that is if it existed at all. We are expected to believe SITE, run by the daughter of an executed Israeli spy, is miffed about the betrayal when in fact it was set-up that way, the “al-Qaeda” server doubling as a grab bag for the corporate media, never shy when it comes to propagating thickheaded neocon lies, designed to provide pretext for the “clash of civilizations,” that it to say providing an excuse for a “civilization” with no shortage of weapons of mass destruction to invade small defenseless countries, kill thousands people—in the case of Iraq, well over a million—and wreck their stuff, like water treatment plants and hospitals.

Once again, on the loose serial murderers, politely called “neoconservatives,” are playing the masses, although the masses, by and large, are not paying too much attention, what with Britney losing her kids to K-Fed, etc. Of course, this lack of attention is dangerous indeed, as it may precipitate another “catastrophic catalyzing event… like a new Pearl Harbor,” if only to rally the masses that are, by nature, clueless but most surely allergic to back-to-back two minute hate sessions and much prefer to be left alone to Dance with the Stars and fancy an Extreme Makeover of their own."
Posted by Tony at 4:49 AM