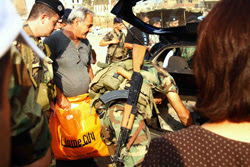 "NAHR AL-BARED, 12 October 2007 (IRIN) - The first Palestinian families displaced by 15 weeks of intense fighting between the army and Islamist militants that left much of north Lebanon’s Nahr al-Bared refugee camp in ruins have begun returning home to start rebuilding their lives.

“I never imagined I would have to leave my home again,” said 80-year-old Mahmoud Nimr Abdou as he boarded the bus carrying the first refugees home from neighbouring Beddawi camp, where the majority of the up to 40,000 people displaced from Nahr al-Bared have been living in cramped conditions. “I will kiss the ground when I return.”....

Asaad accused the army of looting houses in Nahr al-Bared, an accusation backed up by international volunteers from the non-profit group Nabaa, who accompanied the refugees home yesterday.

“I have seen fridges with shrapnel damage for sale in the market in Tripoli,” said Asaad. “I’ve been going to the same market for years and I’ve never seen so many fridges or cookers for sale. My neighbour told me she saw her furniture for sale there.”......"

Salute the "army" that excels in serving tea to IOF invaders and in systematically destroying the refugee camp (from a distance) and then looting it; what cowards!
Posted by Tony at 7:27 AM