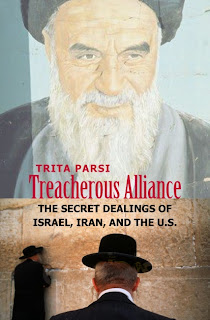 "I’m delighted and honored to welcome Dr. Trita Parsi as a guest columnist at Rootless Cosmopolitan. Following the escalating tension between Iran and the West over the past two years, I’ve found Trita to be a singular voice of sanity in the proverbial world gone mad. As both a scholar and as president of the National Iranian-American Council, he has dedicated himself to promoting dialogue and peace, and he had a particularly important role in bringing to light the 2003 proposal sent from the leadership in Tehran to the Bush Administration, offering a grand bargain in which Iran would address all U.S. concerns — a proposal that was sharply rebuffed by the Bush Administration, under the sway of neocons determined to prevent any rapprochement between the U.S. and Iran......."--- Tony Karon

"Benjamin Netanyahu would like Americans and Israelis to believe that it’s 1938 all over again: Iran, he tells us, is Nazi Germany; President Mahmoud Ahmadinejad is Hitler. And, of course, that means that anyone who advocates diplomacy and engagement with Tehran is simply reprising the tragic appeasement politics of Neville Chamberlain, even as the clock ticks towards catastrophe.

The 1938 analogy is entirely fallacious, but no less powerful because of it – by at once terrifying people and negating the alternatives to confrontation, it paints war as a necessary evil forced on the West by a foe as deranged and implacable as Hitler was.......

Today, Israel is facing a similar situation, but with one big difference. Iran is far more powerful than it was in 1996, while the power of the U.S. to impose its will in the Middle East has diminished considerably. The difficulties confronting the U.S. in Iraq and technological progress in Iran’s nuclear program may compel Washington to recognize that its best interests lie in a grand bargain with Tehran. But the general view in Israel today is the notion that such negotiations must be prevented, because all potential outcomes of a U.S.-Iran negotiation are perceived to be less optimal for Israel than the status quo of intense U.S.-Iran enmity that threatens to boil over into a military clash. "
Posted by Tony at 5:07 AM