Hamas condemns the murder of a Palestinian Christian man in Gaza 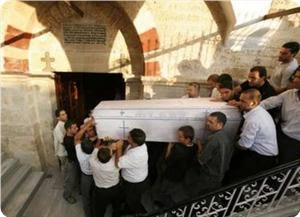 "GAZA, (PIC)-- Hamas has condemned the murder of Rami Ayyad, 30 years, who was found dead on Sunday morning in the Zaitoun neighbourhood of Gaza City with stab wounds and a bullet in the head.

A statement issued by the movement said: "The Muslim-Christian relations in Palestine are stronger than to be affected by such a crime which has been committed by a criminal group. The Palestinian people, Muslims and Christians, belong to this land and are united in defending it."

The movement also called on the people of Gaza to be on their guard as "there are those who want to create chaos, anarchy and insecurity to the Palestinian street, which only serves the Zionist occupation."

Hamas also called on the Palestinian police to start an immediate investigation into the murder and to bring to justice those behind this heinous crime. "
Posted by Tony at 4:29 PM