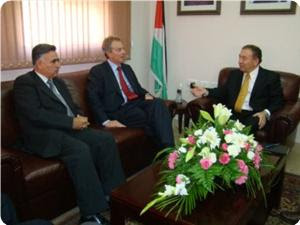 From Khalid Amayreh in occupied Hebron

".....The former British Prime Minister on Wednesday, 10 October, met with Palestinian Authority Chairman Mahmoud Abbas in Ramallah and reportedly discussed with him creating “economic incentives” that would be conducive to creating the right environment for advancing peace between the Palestinians and Israel .

In Hebron , Blair met with the Governor of Hebron Hussein al Araj and town’s mayor Khalid al Oseili, both appointed by Abbas. Hebron is considered a Hamas stronghold.

The two local officials briefed Blair on the political and economic situation in Hebron, the largest city in the West Bank, where hundreds of extremist Jewish settlers, backed by the Israeli army, routinely attack Arabs and vandalize their property......

Earlier, some Hebron businessmen and entrepreneurs accused Blair of seeking “to bribe the Palestinians into giving up the right of return in exchange of economic aide.” “This man is deceitful and duplicitous and can’t be trusted. Besides, he should have understood a long time ago, while he was Britain’s Prime Minister, that the problem in Palestine is this Nazi Jewish occupation which prevents normal economic activities,” said Abu Ahmed Qasrawi.

“How can we have normal economic activities in the West Bank when we are not allowed to travel on our own roads, when Israeli military roadblocks, manned by young, trigger-happy, Gestapo-like soldiers kill every semblance of normal life, economic and otherwise.?”......

In Hebron , Blair avoided reporters and refused to answer questions. Most Palestinian journalists and cameramen boycotted Blair’s visit to Hebron after PA crack police verbally assaulted reporters, threatening to smash their cameras. Eventually, a few foreign journalists, including this reporter, managed to enter Hebron City Hall, but were not allowed to ask questions......

Predictably, Blair is deeply despised in the occupied Palestinian territories as well as through the Arab-Muslim world for his close association with George Bush’s “war on terror,” which is widely viewed by Muslims as a western crusade against their own religion.

Blair is also hated for supporting Israel’s genocidal campaigns in Lebanon and Gaza which killed and maimed thousands of civilians and caused widespread damage to civilian infrastructure."
Posted by Tony at 7:09 PM