Book review: "Married to Another Man" 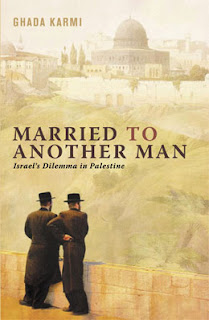 "Dr. Ghada Karmi's latest book Married to Another Man: Israel's Dilemma in Palestine opens with the problem European Zionists faced over a century ago when they first mooted the idea of a Jewish state in Palestine. They found then that there was already a well-established Palestinian society existing in the land they wished to claim as their own. Hence the message sent back to Vienna by the two rabbis who made the discovery: "The bride is beautiful, but she is married to another man."

It is the essence of "Israel's dilemma": how to effect the disappearance of the ever-present Palestinians so that a purely Jewish state can exist on Palestinian land? The Zionist program of ethnic cleansing that has been going on since Israel's creation has not solved the problem. Neither has the living hell of occupation......"
Posted by Tony at 4:33 AM