Video: Ex-general: Iraq `nightmare' for US 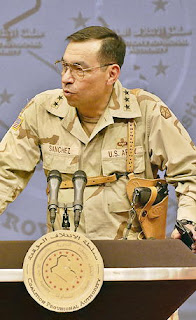 "ARLINGTON, Va. - The U.S. mission in Iraq is a "nightmare with no end in sight" because of political misjudgments after the fall of Saddam Hussein that continue today, a former chief of U.S.-led forces said Friday.

Retired Lt. Gen. Ricardo Sanchez, who commanded coalition troops for a year beginning June 2003, cast a wide net of blame for both political and military shortcomings in Iraq that helped open the way for the insurgency — such as disbanding the Saddam-era military and failing to cement ties with tribal leaders and quickly establish civilian government after Saddam was toppled.

He called current strategies — including the deployment of 30,000 additional forces earlier this year — a "desperate attempt" to make up for years of misguided policies in Iraq. "There is no question that America is living a nightmare with no end in sight," Sanchez told a group of journalists covering military affairs......

Sanchez went on to offer a pessimistic view on the current U.S. strategy against extremists will make lasting gains, but said a full-scale withdrawal also was not an option......."

Click Here to Watch Video
Posted by Tony at 8:48 AM