Slum Fights: The Pentagon Plans for a New 100 Years' War 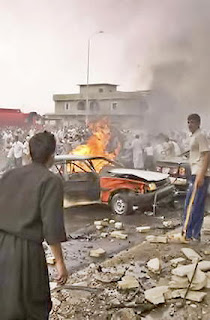 by Nick Turse and Tom Engelhardt

".....Duane Schattle doesn't mince words. "The cities are the problem," he says. A retired Marine infantry lieutenant colonel who worked on urban warfare issues at the Pentagon in the late 1990s, he now serves as director of the Joint Urban Operations Office at U.S. Joint Forces Command. He sees the war in the streets of Iraq's cities as the prototype for tomorrow's battlespace. "This is the next fight," he warns. "The future of warfare is what we see now."

He isn't alone. "We think urban is the future," says James Lasswell, a retired colonel who now heads the Office of Science and Technology at the Marine Corps Warfighting Laboratory. "Everything worth fighting for is in the urban environment." And Wayne Michael Hall, a retired Army brigadier general and the senior intelligence advisor in Schattle's operation, has a similar assessment, "We will be fighting in urban terrain for the next hundred years."......"
Posted by Tony at 7:48 AM