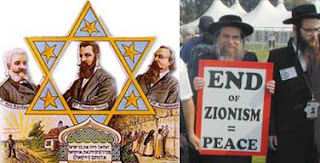 "......So, everyone out there should be extra careful these days lest he or she inadvertently offends the sensibilities of Zio-Nasiz, the rulers of America, so that they won’t be lumped together in one parcel with Adolph Hitler and his Nazi cohorts. And the way to make sure that one remains safe is by meticulously observing the following instructions:

Don’t you ever compare the blockade of Gaza, including barring Palestinians from accessing food and work, to Auschwitz and Ghetto Warsaw.

Don’t call the systematic Israeli savagery against Palestinians in the West Bank and Gaza, including the nearly daily murder of Palestinian children “murderous and criminal acts.”

Because if you do, then you are a repulsive “anti-Semite” on equal footing with the Gestapo and SS…and your goal is the destruction of the Jewish people!!!

This week, Avigdor Lieberman, a truly Nazi-like cabinet minister in the Ehud Olmert government, called those Israeli Jews who deviated from “the national consensus” Kapos, a reference to Jewish traitors who persecuted Jews on behalf of the Nazis.

Well, I guess the Nazis must have also called those critics of Nazism Kapos or a similar epithet for deviating from “national consensus”!!

What a feeling of de-ja-vu !

Well, let the Zionists eat their hearts out for as long as they wish. The world will no longer be bullied by the charges of anti-Semitism. For if opposition to Israel’s Nazi oppression of the helpless Palestinians is anti-Semitic, then anti-Semitism becomes a moral obligation incumbent upon all mankind."
Posted by Tony at 4:47 AM