A reign of terror which history has chosen to neglect 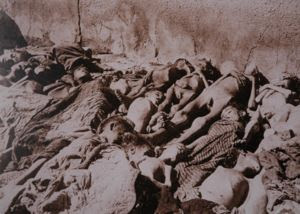 ".....Turkey's reign of terror against the Armenian people was an attempt to destroy the Armenian race. While the Turks spoke publicly of the need to "resettle" their Armenian population – as the Germans were to speak later of the Jews of Europe – the true intentions of Enver Pasha's Committee of Union and Progress in Constantinople were quite clear.

On 15 September 1915, for example (and a carbon of this document exists), Talaat Pasha, the Turkish Interior minister, cabled an instruction to his prefect in Aleppo about what he should do with the tens of thousands of Armenians in his city. "You have already been informed that the government... has decided to destroy completely all the indicated persons living in Turkey... Their existence must be terminated, however tragic the measures taken may be, and no regard must be paid to either age or sex, or to any scruples of conscience."