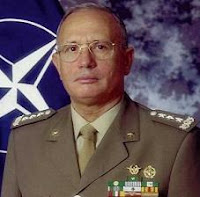 An Important Article
From: Peace Palestine

By Fabio Mini
(an Italian General, former commander of the NATO forces in Kossovo)

Writing for Italy's L'Espresso, Italian General Fabio Mini has understood and explained the dangerous mechanisms of gaining consensus to wage war against "Enemies", which are variable and flexible according to the interests of hegemonic power. This enlightening article explains the manner in which War against Iran has been promoted in the West as well as the operative elements that will bring it about. A MUST READ! Translated from Italian by Diego Traversa and revised by Mary Rizzo for Tlaxcala and Peace Palestine.

"Anyone who thought that the green light for the Israeli-American attack against Iran would come from the American Congress, was wrong. Equally wrong were those who thought that a president like Bush, so frustrated by the Iraqi chaos, the Afghan deadlock and the industrial lobbies’ pressures, would wind up making the decision on his own. The attack against Iran will take place thanks to the newly-appointed French Foreign Minister Kouchner. In these years of threats and counter-threats, of pretexts to make war, the only “revealing” words have been those from the laconic phrase “we must prepare ourselves for the worst.” Many have taken these words as a slip of the lip, others have regarded them as a bad luck-dispelling provocation, others as an instigation and still others as a submission to an ineluctable event. It could be that the sentence contains all of this, but the profound essence of Kouchner’s words is different......

The same would happen if Iran turned sabotage actions and bombings against the oil installations of other countries in the area. The military strategy of the attack against Iran can’t therefore be entrusted to a surgical attack or to one single component. It can be nothing but that of “Swarm Warfare” (or Horde Warfare), unearthed by Arquilla and Ronfeld after the unmatchable realization by Gengis Khan. In modern terms, this strategy makes all the components of warland operative, naval, air, missile, space, virtual and information oneson multiple settings and levels. To achieve all this, it’s necessary that the “swarm” of the various components and actions, which develop by focusing on one place and then by spreading to other directions and places, be are at least sufficient enough in order to prevent any sort of reaction. The hordes entrusted with destroying the targets materially have to get integrated and to focus on targets along with the virtual hordes of diplomatic actions, of psychological warfare and with those of the manipulation of information.

The military actions have to be aimed at creating a humanitarian emergency that allows the international organizations to intervene in Iranian territory. Obviously, the responsibility for the catastrophe must be pinned on the Iranians themselves. Even in this respect, everything is ready or practically ready, not least after Kouchner’s exhortation. International agencies and NGOs are already looking forward to going to Iran to set women free from their chadors. If they are given the chance to intervene so as to gather refugees, to treat the wounded, to do the counts of the dead and to call elections every month, there will be a rush to bring democracy to Iran......."

http://espresso.repubblica.it/dettaglio/Operazione-sciame-di-fuoco/1796788
Posted by Tony at 8:29 AM