While the Puppet Abbas Runs Around in Circles, From Meeting to Meeting...Israeli army orders confiscation of Palestinian land in West Bank 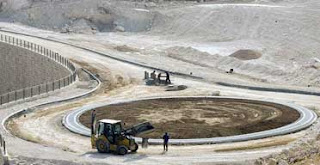 The confiscation happened as Israeli and Palestinian negotiators met to prepare the ground for a meeting hosted by President George Bush in the United States aimed at reviving a diplomatic solution to the conflict.

However, critics said the confiscation of land suggested that Israel was imposing its own solution on the Palestinians through building roads, barriers and settlements that would render a Palestinian state unviable......."
Posted by Tony at 5:26 AM