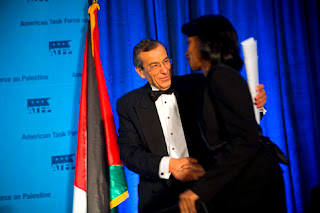 ".....The ongoing preparations for the upcoming November "meeting" offer further proof of this delusional strategy. To appease US Secretary of State Condoleezza Rice, Abbas and Israeli Prime Minister Ehud Olmert hold frequent talks in order to produce a "framework" of "principles" for negotiation. [4] Although his presidency was hailed and supported by the US and Israel, after more than eighteen months in power Abbas has yet to yield any tangible results. This includes a year in office during which the ATFP (the American Task Force on Palestine) concedes that Abbas and Fatah held "uncontested power," but have been "systematically undermined by Israel." [5] Nor will this situation change. In fact, Abbas has already been scolded by Rice that a "timeline" for "settling core issues" and creating an independent Palestinian state will not be achieved at the "meeting." [6] It is, however, an opportunity for Israel and the US to wrench even greater concessions from the Palestinians and any Arab states foolish enough to participate in this farce. Their reward for attending is a photo-op with President Bush and their own copy of another inevitably obsolete document......

Although the ATFP is correct to assert that Palestinian-Americans have a right and a duty to engage in the American political process, the cost of entry is not their dignity or souls. Unlike the ATFP, Palestinians understand the difference between getting their "hands a bit dirty" through activism and building institutions, and sullying them by associating with thugs, collaborators, and corrupt and inept politicians. [22] Participating in the American political system does not require you to fawn over Rice or other dignitaries and parrot their rhetoric in the vain hope that they will deign to reward the Palestinians with a state. Nor does it necessitate that you praise Abbas as a man of "personal and political courage." [23] No truly independent nation has emerged because its population was supplicant and subservient, nor should that be the criteria for the Palestinians......"
Posted by Tony at 11:56 AM