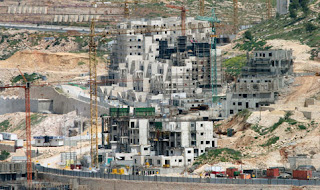 Israel's settlement building has been met with little protest by the so-called "international community": The Israeli settlement of Har Homar near Jerusalem is expanded on land confiscated from Palestinian owners in the West Bank town of Bethlehem, April 2006.

During a 10 October debate in Brussels, speakers from the Portuguese government, which holds the Union's rotating presidency, and the European Commission did not refer directly to the Israeli order to seize control of four Arab villages located between East Jerusalem and the West Bank city of Jericho.

Their reticence drew angry response from some members of the European Parliament, the EU's only directly-elected body.

"As Palestinians see all hope of a viable Palestinian state disappear before their eyes, what is the EU going to do?" asked Chris Davies, a British Liberal MEP. "You know very well it will do nothing, except mouth a few words. There will be no tangible action."......"
Posted by Tony at 4:38 AM