Nonviolent resistance a means, not the end 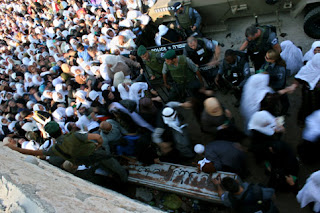 ".....The first problem is that the article does not do justice to the rich tradition and contemporary practice of nonviolent resistance, or popular struggle, in Palestine. The first intifada and the protests in Bil'in are cited, but the Palestinians draw on a far deeper reservoir of experience, dating at least as far back as the 1936 Revolt against British occupation and creeping Zionist colonization. As writer Mazin Qumsiyeh has noted, part of the Revolt included "a conference of 150 delegates representing all sectors of the population calls for a general strike and refusal to pay taxes to the British occupation authorities." [2]

Whether under the British, Jordanians or Israelis, Palestinians have always frustrated their would-be overlords with non-cooperation and resistance. The first intifada is rightly seen as a watershed moment, when, as one nonviolence expert has estimated, around 85 percent of resistance was of the nonviolent form, including "commercial boycotts, labour strikes, demonstrative funerals, the hoisting of Palestinian flags, the resignation of tax collectors, and many types of political noncooperation." [3].....

Stephan shows that she is indeed aware of how, post-Oslo, the newly formed PA channeled resistance into cooperation, and dynamic struggle into corruption and personal advancement. It is not quite correct, however, to describe this as a result of the PLO's inability to achieve gains at "the negotiating table." The agreements on paper and the PA's subsequent disinterest in "mobilizing people to challenge the economic, political, and military pillars underlying the occupation" were intrinsically related, representing capitulation first in word then in deed.

The PA's lack of support for popular struggle at the official level is reflected in a general apathy amongst a middle-upper class, who are financially prospering and do not wish to rock the boat. This is to be sharply distinguished from the multitude of jobless, hungry, and exhausted Palestinians, whose "apathy" towards popular struggle is the outcome sought by the cumulative effect of the Israeli occupation's siege, humiliations and life-draining injustices......

Not only do nonviolent actions get no or minimal coverage, but when Israeli occupation forces retaliate with violence, and even deadly force, the international outcry barely rises above a whimpered plea for "restraint." In the first month of the second intifada, 141 Palestinians were killed even before Palestinian resistance groups had begun serious militarized self-defense. [5] Or recall the massacre in Rafah in May 2004, when Israeli helicopters fired on a peaceful march. [6] Despite the chaotic, bloody aftermath being captured on film, the most the "deeply troubled" US State Department could muster was an expression of "concern." [7]......

But seen in this light, the essence of Palestinian popular struggle is directly contrary to the methods of Abbas and Fayyad -- the way of diplomatic privileges, backroom compromises and appeasement of Washington and Tel Aviv. Their track record has been to muzzle the collectively expressed desires of their people, from Oslo to the boycott of the elected Hamas government. Additionally, just as popular struggle has nothing in common with the Abbas-Fayyad regime, so too the November "peace conference" has little to do with securing Palestinian self-determination....."
Posted by Tony at 5:09 AM