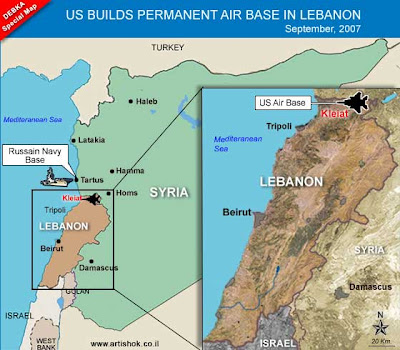 An important story on which Franklin Lamb reported in CounterPunch on May 30 and which was posted on this blog.

Here is an excerpt from Lamb's original story:

"...According to Washington observers watching developments, the base has been pushed by elements in the office of the US Secretary of Defense and the Joint Chiefs of Staff at the urging of Israeli operative Elliot Abrams. AIPAC can be expected to do the necessary work in Congress and with House Foreign Affairs, Appropriations, Intelligence, and Armed Service committees hermetically sealed by stalwarts of the Israel Lobby, it can be expected that it will be added as a rider to an unsuspecting House bill coming along.

"We need to get this base built as quickly as possible as a forward thrust point against Al Qaeda and other (read Hezbollah) terrorists", according to AIPAC staffer Rachael Cohen. Asked if Israel will offer training and advisors to the Lebanese army, Ms. Cohen replied, "we will see what we will see, Lebanon, smezzanon its not about them, its about stopping the terrorists stupid!""

Now DEBKAfile is saying that building the base has started:

"The air base, according to DEBKAfile’s military sources, will be located at Kleiat in northern Lebanon roughly 75 air miles from Damascus, which these days doubles as a shared Syrian-Iranian military hub and Tehran’s eastern Mediterranean forward base. The American air installation will also lie 22 air miles from Tartous, Syria’s main naval base and the Russian Mediterranean fleet’s command center. And the aircraft posted there will be minutes away from the joint Syrian-Iranian arms and missiles industries at Homs and Hamma.

DEBKAfile’s source report the Bush administration’s drastic change of policy on Lebanon was settled in consultations at the Pentagon and National Security Council after the talks the chief of the US Central Command Adm. William Fallon held with Lebanese government heads on July 29.

This new direction was confirmed after the Israeli air raid over Syria of Sept. 6.

It brings the American military back to Lebanon after a 25-year absence. In 1983, President Ronald Reagan pulled US troops out of the country after Syrian military intelligence orchestrated terrorist bombing attacks on the US embassy and Marines headquarters in Beirut, which left more than 300 soldiers, diplomats and CIA agents dead.

The first stage of construction will reactivate the small defunct air base at Kleiat as a joint US-Lebanese venture. Prime minister Fouad Siniora will explain that the four months of bloody fighting to crush the Fatah al-Islam revolt in the northern Nahar al-Bared camp demonstrated how badly the Lebanese army needs an operational air base in the region. US Air Force engineers and technicians have begun work on the new air field. At a later stage, it will be expanded for American military use."
Posted by Tony at 6:39 PM