Arab Dogs of the Empire 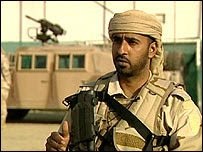 "We try to convince the people about the US, about British. They came here to give you peace" UAE Maj Ghanem al-Mazroui

"The BBC's security correspondent, Frank Gardner, can reveal that Arab soldiers have been taking part in dangerous missions alongside US troops in Afghanistan.

Troops from the United Arab Emirates (UAE) have been delivering humanitarian aid to their fellow Muslims and, on occasion, fighting their way out of Taleban ambushes. Though Jordanian forces have been carrying out some base security duties, the UAE's troops are the only Arab soldiers undertaking full-scale operations in the country.
Until now, their deployment has been kept so secret that not even their own countrymen knew they were here......."
Posted by Tony at 7:58 AM