This is How Dayton's Palestinian Puppet Forces Are Created 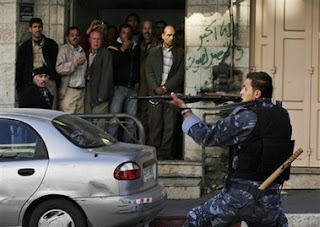 "You are not here to confront the Israeli side, and the conflict with it has led until now only to suffering and not to positive results. You must prove to the Israelis that you are capable of performing and succeeding."

He told the young officers, most of them in their 20s, that their objective, first and foremost, is to aid their people to contend with the threats of crime, terror and other problems.......

It is not just a matter of the American training program, but also and mainly the motivation and "fighting spirit" of those soldiers, "the cream of Palestinian youth." They were sent to Jordan only in late January, for a four-month course, as part of the plan drawn up by the U.S. Security Coordinator for the Israel-Palestinian Authority, Lieutenant General Keith Dayton, to rebuild the PA security services and particularly the PNS.

Potential recruits were subjected to quadruple vetting. First the PA rejected candidates who were unsuitable because of past involvement in crime or terror organizations. Then the Israeli Shin Bet, the Americans and Jordanians considered each candidate separately. Only 20 names were struck off the list by the Israelis.

The training the Palestinian troops are receiving at the camp in Giftlik is very diverse: using guns and rifles, taking control of houses and clearing them out, conducting arrests, crowd control, using force and even lessons about human rights and military ethics. They are being trained to deal also with hostage situations.......

"Dayton's baby," as some senior PA officials have dubbed the battalion, made the news recently after Israel agreed to have the soldiers deploy to Jenin on completing their training, but there is still no certainty regarding their first assignment.

This is the first battalion to undergo American training, but Dayton's plan calls for training another four battalions of similar size. Palestinian Interior Ministry officials say a second group will be able to leave for training in Jordan in early August.

Dayton and his team have accompanied the battalion since its inception. It was also they who presented the Defense Ministry this past February with the lists of equipment transfers that Israel will have to approve for the new PNS forces: cars (just recently, Israel okayed equipping PA security services with 148 pickup trucks for moving troops), uniforms, shoes, first-aid equipment and more).

Contrary to media reports until now, the Palestinians were pleasantly surprised by the Israeli defense establishment's willingness to help make the new forces' training and equipment a success, perhaps out of a desire to avoid friction with the U.S. administration.......

Dayton's team is also involved in setting up a strategic planning group at Yahya's Interior Ministry, which is responsible for all security services. The group is meant to draw up a budget and strategic guidelines for PA forces. In addition, the American team is planning infrastructure projects such as rebuilding bases and training facilities for PA troops. "
Posted by Tony at 7:41 PM