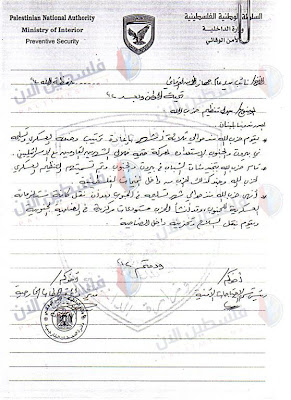 Furthermore, the documents which were seized from the offices of the said apparatuses that were abolished after Hamas Movement took control of security in Gaza Strip in the middle of June of last year revealed that elements and agents of the said apparatus gathered intelligence information on the military movements of Hizbullah in southern Lebanon, and on the volume of weapons the party has before passing such information to the Israeli intelligence departments.

Moreover, the documents revealed that the Dahalan's defunct apparatus informed the Israeli spying agencies on the whereabouts of Hizbullah's weaponry depots and the routes the Lebanese party was using in transporting their weapons in Lebanon.

The seized documents that were signed by the director of the apparatus's "external stations", also alleged that Hizbullah was recruiting and financing a number of military organizations loyal to it inside Lebanon, including groups in the Palestinian refugee camps in southern Lebanon.

One of the seized documents also alleged that Syria had, for the first time ever, supplied the Lebanese Amal Movement with missile and anti-aircraft missiles batteries.

A fourth document of the seized documents claimed that the security department of Hizbullah was preparing a list of suspected names with connection to the Jordanian, Egyptian, and US intelligence departments with the aim to "liquidate" them, adding that the Lebanese internal security department was furnishing Hizbullah with copies of foreign and Arab passports entering into Lebanon to Hizbullah's concerned agencies in order to check the identities of those passports' holders, especially the European passports.

The Israeli external intelligence apparatus, the Mossad, used to supply its agents with forged passports in order to get into certain countries and carryout spying or assassination missions as they did against Hamas's supreme political leader Khaled Mishaal in 1997 in the Jordanian capital Amman. The attempt against Mishaal was botched by one of his bodyguards.

Prior to taking over security control of the Strip, the Hamas Movement had repeatedly warned that the said apparatus was working for foreign agenda and not in the national interests of the Palestinian people."
Posted by Tony at 4:14 AM