No Checkpoints in Heaven 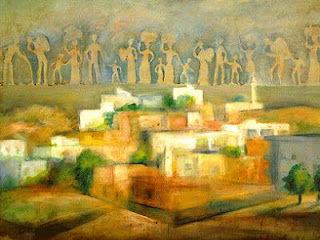 " still vividly remember my father’s face - wrinkled, apprehensive, warm - as he last wished me farewell fourteen years ago. He stood outside the rusty door of my family’s home in a Gaza refugee camp wearing old yellow pyjamas and a seemingly ancient robe. As I hauled my one small suitcase into a taxi that would take me to an Israeli airport an hour away, my father stood still. I wished he would go back inside; it was cold and the soldiers could pop up at any moment. As my car moved on, my father eventually faded into the distance, along with the graveyard, the water tower and the camp. It never occurred to me that I would never see him again.

I think of my father now as he was that day. His tears and his frantic last words: “Do you have your money? Your passport? A jacket? Call me the moment you get there. Are you sure you have your passport? Just check, one last time…”

My father was a man who always defied the notion that one can only be the outcome of his circumstance. Expelled from his village at the age of 10, running barefoot behind his parents, he was instantly transferred from the son of a landowning farmer to a penniless refugee in a blue tent provided by the United Nations in Gaza. Thus, his life of hunger, pain, homelessness, freedom-fighting, love, marriage and loss commenced......

It’s been fourteen years since I last saw my father. As none of his children had access to isolated Gaza, he was left alone to fend for himself. We tried to help as much as we could, but what use is money without access to medicine? In our last talk he said he feared he would die before seeing my children, but I promised that I would find a way. I failed.

Since the siege on Gaza, my father’s life became impossible. His ailments were not ‘serious’ enough for hospitals crowded with limbless youth. During the most recent Israeli onslaught, most hospital spaces were converted to surgery wards, and there was no place for an old man like my dad. All attempts to transfer him to the better equipped West Bank hospitals failed as Israeli authorities repeatedly denied him the required permit.

“I am sick, son, I am sick,” my father cried when I spoke to him two days before his death. He died alone on March 18, waiting to be reunited with my brothers in the West Bank. He died a refugee, but a proud man nonetheless.

My father’s struggle began 60 years ago, and it ended a few days ago. Thousands of people descended to his funeral from throughout Gaza, oppressed people that shared his plight, hopes and struggles, accompanying him to the graveyard where he was laid to rest. Even a resilient fighter deserves a moment of peace."
Posted by Tony at 8:27 PM