Ilan Pappe: The Israeli historian some don't want you to hear 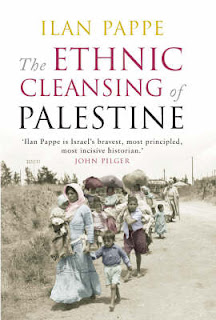 "Dr. Ilan Pappe, whose parents fled Nazi Germany, received his doctorate at Oxford University and was Senior Lecturer of Political Science at Haifa University in Israel, Academic Director of the Research Institute for Peace at Givat Haviva, and Chair of the Emil Tourma Institute.

He is currently Chair of the Department of History at the University of Exeter and Co-Director of the Exeter Center for Ethno-Political Studies. Pappe has just completed a cross-Canada tour on the topic of his book, The Ethnic Cleansing of Palestine. Am Johal interviewed him in Vancouver for rabble.ca.......

Johal: As someone who travels to different places in the West, the debate around the Israeli/Palestinian conflict is mediated differently in parts of Europe, Canada and the U.S. What is your view of how the conflict is disseminated in different places and the diversity of the public sphere?

Pappe: I think there are differences. In the U.S. and Canada, for the purpose of this question, there is no real debate in the mainstream media. I think there is a stifling affect that happens. Whenever someone tries to enlarge the scope of the debate, the existing mechanisms don't allow it.
In Britain, the Scandinavian countries, Spain, Italy, parts of France, different opinions can be heard. Germany is not that different from the U.S., Canada or Austria. The new members of the European Union in Eastern Europe are even worse. I'm amazed. I didn't expect to see such a difference. The variety of views, the lack of pluralism.

Even Jimmy Carter said that there is a difference in terms of how things are talked about in Israel and outside of it.

If you compare the U.S. to Canada, or to Israel, there are differences in the limitations of the discussion. The difference is that in Israel, it is done by self-censorship. People are very confident in their own truisms, their own moral high ground.

This is the function of years and years of indoctrination. We have some changes in the civil society. Here, in Canada, people are timid. They are afraid to say what their human instinct tells them they should say. It is an intimidating situation to speak out........."
Posted by Tony at 6:20 AM