Rabbi Eliyahu: Life of one yeshiva boy worth more than 1,000 Arabs 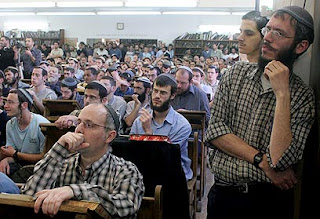 "Some 1,000 people attended a memorial service at the Mercaz Harav rabbinical seminary Thursday, marking the one-month anniversary of the murderous attack which claimed the lives of eight young men.

Also attending the service were many prominent rabbis of the Religious Zionist Movement, who were not shy about expressing their rage against the government's policy.

Rabbi Yaakov Shapira, head of the Mercaz Harav yeshiva, chose to explain the attack by saying that "the Torah and the land of Israel are acquired only through agony."

Former Sephardi chief Rabbi Mordechai Eliyahu called on the government to decree that for every life lost in the attack another yeshiva and township will be formed.
"Even when we seek revenge, it is important to make one thing clear – the life of one yeshiva boy is worth more than the lives of 1,000 Arabs.

"The Talmud states that if gentiles rob Israel of silver they will pay it back in gold, and all that is taken will be paid back in folds, but in cases like these there is nothing to pay back, since as I said – the life of one yeshiva boy is worth more than the lives of 1,000 Arabs," added Rabbi Eliyahu......"
Posted by Tony at 6:44 AM